Yellowstone National Park: a lesson for the economy?

a lesson for the economy? 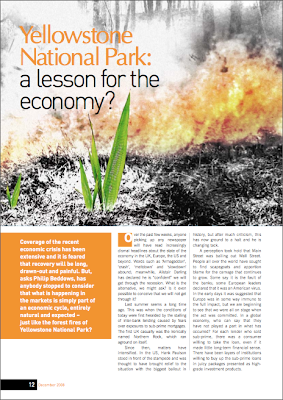 Coverage of the recent economic crisis has been extensive and it is feared that recovery will be long, drawn-out and painful. But, asks Philip Beddows, has anybody stopped to consider that what is happening in the markets is simply part of an economic cycle, entirely natural and expected – just like the forest fires of Yellowstone National Park?

Over the past few weeks, anyone picking up any newspaper will have read increasingly dismal headlines about the state of the economy in the UK, Europe, the US and beyond. Words such as ‘Armageddon’, ‘crash’, ‘meltdown’ and ‘slowdown’ abound; meanwhile, Alistair Darling has declared he is “confident” we will get through the recession. What is the alternative, we might ask? Is it even possible to conceive that we will not get through it?

Last summer seems a long time ago. This was when the conditions of today were first heralded by the stalling of inter-bank lending caused by fears over exposures to sub-prime mortgages. The first UK casualty was the ironically named Northern Rock, which ran aground on itself.

Since then, matters have intensified. In the US, Hank Paulson stood in front of the stampede and was thought to have brought relief to the situation with the biggest bailout in history, but after much criticism, this has now ground to a halt and he is changing tack.

A perception took hold that Main Street was bailing out Wall Street. People all over the world have sought to find scapegoats and apportion blame for the carnage that continues to grow. Some say it is the fault of the banks; some European leaders declared that it was an American virus. In the early days it was suggested that Europe was in some way immune to the full impact, but we are beginning to see that we were all on stage when the act was committed. In a global economy, who can say that they have not played a part in what has occurred? For each lender who sold sub-prime, there was a consumer willing to take the loan, even if it made little long-term financial sense. There have been layers of institutions willing to buy up the sub-prime loans in juicy packages presented as high- grade investment products.

The UK has now nationalised a number of our major high street banks, but the one that has worked hard to maintain its independence – Barclays – has been castigated by some who seem not to admire the bank’s efforts to remain free of state control. At a time when pension funds have lost value from falling stock markets, companies like BP and Shell who are reporting huge increases in profits have been criticised – without the critics acknowledging the vital importance to the UK economy and pension funds of profitable companies. Some commentators have declared that the financial (i.e. banking) crisis threatens the real economy, without seeming to realise that the City is an integral part of the true economy of the UK.

There is a message of hope, however – and its source may surprise you. Europeans who criticised the US when the crisis first showed itself there will yet see that it is the US who will come charging out of the crater whilst others are still falling into it. Which brings me to Yellowstone.

Twenty years ago in 1988, 800,000 acres of Yellowstone National Park burned to the ground, with official records showing that 248 individual fires raged across it that summer. Reports stated that it had been completely destroyed and a local senator in Wyoming declared that it would not recover fully for a thousand years.

But today, anyone visitingYellowstone will see that the senator was wrong. The park is becoming renewed and refreshed for a new period of its life.

The key is that the fire was not an unnatural event, but something which has occurred many times in the area’s history (major fires also occurred in the 1700s and 1800s). In fact, the vegetation has specifically adapted itself to survive and recover from such devastation. Professor Bill Rome at Colorado State University has said that “fire is an integral part of the forest ecosystem” and that “it would be like talking about a forest recovering from winter. When you experience your first winter, it may seem devastating, but after a while you begin to realise every winter is followed by spring – it’s just a natural cycle.”

The fires across Yellowstone may have killed off vegetation above ground but the roots often survived. The cones of the lodgepole pine are so tightly sealed that only great heat will enable them to open to release seeds and create the opportunity for regeneration. Even more incredibly, the seeds of the buckbrush shrub can remain dormant for hundreds of years and only germinate after exposure to high temperatures.

So what does this mean for us in the real economy? It means we are living in a turbulent and natural world where cycles are unavoidable. It doesn’t matter how many financial models we build: north will still be north; summer will slip into autumn and then winter and not emerge again until after spring; and night will follow day.

We are caught in nature’s clutches and bound by her laws – boom and bust is just another element in the seesaw of life that brings us our daily yin and yang. As Giles Keating, head of Global Research at Credit Suisse wrote in November 2007: “The global slowdown is part of a natural cycle.”

So what are we to do without the ability to control matters? Should we just stand by and watch?

We are not helpless: out of the ashes of Yellowstone came new life. The fire cleared the way for the growth of trees that needed it to give them the daylight and space to develop. The fire in our markets will not subside for some time to come, but eventually, our actions will help to douse it and it will burn out. The sun will shine again on the economy and yes, even big bonuses will return. It is all just part of the nature of the cyclical world in which we and our economy operate.

Let us hope that our leaders will remember the simple wisdom of Chauncey Gardiner in the Peter Sellers film Being There. He spoke to the US President about the garden changing with the seasons, and begins to look like a towering figure compared with the burned-out masters of the universe.

Steady state is non-existent; turbulence is inevitable; but re-growth is constant. If we use our resources well and keep the garden well-tended, shaping it in the expectation that good years will be followed by bad, then we will always keep something aside for a rainy day and be better equipped to survive the inevitable storms. People will adapt and make the most of new opportunities that changed circumstances bring. 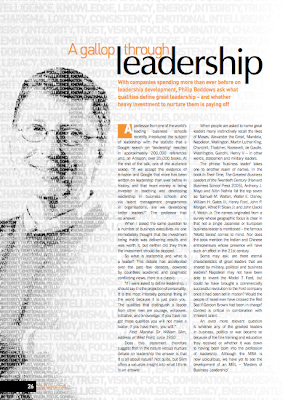 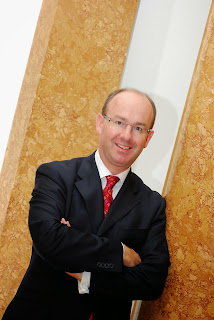